See more at www.brilliantnews.com
When we think of Antarctica, we think of snow, clusters of wildlife and beautiful landscapes… but there is so much more. Its huge expanses of white winterland are full of mystery, so let’s discover the 10 Secrets Hidden in Antarctica.

1) Nazi settlements
In 1937, the Nazis invaded Antarctica, and took Queen Maud Land from Norway, and even started to make settlements. They proved that they could even build naval bases on fields of ice. There’s also a rumour that they built a very large secret settlement in Antarctica in case Hitler needed a hideout. Could it be possible that he ran away and is still alive today? No.

2) Atlantis
It took a team of Russians twenty years to drill through 2 miles of ice to discover this fresh water lake under the surface that holds more than 3500 kinds of living bacteria isolated for the last 20 million years. Lake Vostok is almost the size of lake Ontario and mysteriously, they have found remarkable magnetic anomalies around this lake, perhaps from something buried below the surface. Many suspect metals from a lost civilization… Many even believe it to be the legendary resting place of Atlantis…

3) Blood Falls
This gash in the ice seems to be poring blood into the ocean. In 1911, some researches believed their color to be due to a microscopic red algae. But it has been since proven to be false. But it is now believed to be caused from oxidized iron, giving the water a red tint. Could this be more evidence of a buried civilization? The amazing thing, is that no one is actually certain.

4) Area 52
There is a strange shape that has been spotted on Google Earth on the surface of Antarctica, which appears to be airbrushed out. Someone doesn’t want us to know what this 14 and a half mile long square shape is and leaves many to believe it to be an Southern version of Area 51.

5) Weather Control
In the 1950s, the US government invested a lot of money in studying the weather in the Antarctica with more purposes than giving a forecast. By using radiation among other things, they were very confident that they could control the weather worldwide. Could this have contributed to increase of hurricanes?

6) Strange shapes
There are very strange shapes strewn about the surface of Antarctica, some of them are caused by the extreme weather conditions. But others seem to be a mystery. A common theory of course is aliens, but the truth is we just don’t know for sure what could have caused some of them…

7) UFOs?
UFO hunters have spotted what appears to be a disc poking out of a cave. It has also been suggested that the disc could be linked to the supposed secret Nazi base perhaps experimenting with flying machines. In recent years, we can still see entrances built into the side of mountains, with the saucer shape protruding at a very high altitude.

8) Subterranean Mountains
Antarctica is home to a huge mountain range about the size of the Alps. However, if you look at the horizon, you’ll only see a relatively flat surface. These billion year old mountains aren’t invisible, if not buried covered in tonnes of snow and ice.

9) Underground stations
In 1957, the US Government decided to set up 5 more stations in Antarctica in order to do some scientific research. But after some time, there were rumours that they were building secret underground stations besides the 5 proposed ones. According to this leaked heat-signature, underground tunnels or passageways can be made out, at about two miles from an airstrip. The question is why build a secret underground base in the middle of an ice desert?

10) The real map
We have always seen this map of Antarctica, but that’s not entirely accurate. Because of constant temperature changes the surface is always adapting as the ice thaws and holes appear and re-appear leaving researchers baffled as to why.

Did you know all of these secrets in Antarctica?
Comment below! 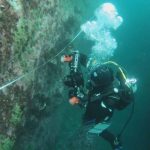 Up close and personal with mysteries of the Atlantic Ocean's ecosystem
Previous Post
This Lifelike Doll, Is Doing The Most TERRIFYING Things…
Next Post 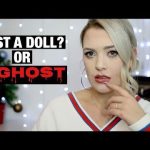