Please someone tell me this isn’t real! wtf??

Some say it was shot in 1989, some say 1996.
Video was shot by John Wabe. Was he the best special effects creator of his time.. or had he witnessed something so incredible that it has now endangered his life, as he hides from sinister forces bent on abducting him.

forsajt says, check out ‘Is It Real Crop Circles Part 5’. 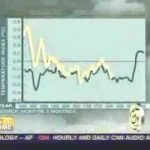