UFO enthusiasts have descended on rural Nevada near the secret US military installation known as Area 51, long rumoured to house government secrets about alien life, with local authorities hoping the visitors were coming in peace.

Some residents of Rachel, a remote desert town of 50 people a short distance from the military base, worried their community might be overwhelmed by unruly crowds turning out in response to a recent, viral social-media invitation to “storm” Area 51.

The town, about 240km north of Las Vegas, lacks a grocery store or even a gasoline station.

Dozens of visitors began arriving outside Rachel’s only business – an extraterrestrial-themed motel and restaurant called the Little A’Le’Inn – parking themselves in cars, tents and campers. A fire truck was stationed nearby.

One couple, Nicholas Bohen and Cayla McVey, both sporting UFO tattoos, travelled to Rachel from the Los Angeles suburb of Fullerton with enough food to last for a week of car-camping.

“I’ve always been into aliens because when I was born my uncle told me that my mom got abducted and turned me into a half-breed alien,” joked Bohen.

“I was told that story my whole life and I have always been into aliens, into the whole scene and I have always wanted to come out to Area 51 to see the black mailbox and whatever else. And there is not a better time than now to do it. So, I got the time off and everybody said I was crazy but it seemed like a good idea to me,” he added.

Area 51 was shrouded in secrecy for decades, stoking conspiracy theories that it housed the remnants of a flying saucer and the bodies of its alien crew from the crash of an unidentified flying object in Roswell, New Mexico, in 1947.

The US government did not confirm the base existed until 2013, when it released CIA archives saying the site was used to test top-secret spy planes.

The documents, however, did not end suspicion about space aliens there. 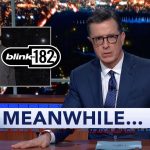 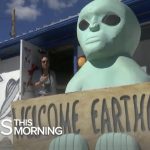