Former Navy pilot describes UFO encounter studied by secret Pentagon program. For most of his 18-year career as a U.S. Navy pilot, Cmdr. David Fravor said his mother-in-law used to ask him a question: Had he seen a UFO? For 15 years, the answer was no. But one clear afternoon off the coast of California in 2004, he says, that changed.

Fravor, the commanding officer of a Navy squadron at the time, said he saw a flying object about the size of his plane that looked like a Tic Tac after a break in a routine training mission. The object moved rapidly and unlike any other thing he had ever seen in the air. He has not forgotten it since.

Fravor’s story emerged this week after the Pentagon publicly acknowledged for the first time the existence of a recent program dedicated to studying unidentified flying objects. The funding for what was known as the Advanced Aviation Threat Identification Program ran from 2007 to 2012. But officials familiar with it said some of its efforts have continued.

The news of its existence marks one of the most significant disclosures about government research into flying objects — and the so-far-unproven possibility of extraterrestrial aircraft — since Project Blue Book, a lengthy Air Force study of thousands of UFOs that was shut down in 1969. Project Blue Book failed to find “any technological developments or principles beyond the range of present-day scientific knowledge,” and no evidence of any “extraterrestrial vehicles,” according to the Air Force, though a small portion of the events it studied remain unexplained.

The encounter Fravor described was analyzed by the recent Defense Department program, he said, but its most significant questions — the nature of the object and what it was doing — have also remained unanswered.

Fravor says he is certain about one thing: “It was a real object, it exists and I saw it,” he said in a phone interview on Monday, as he described the sighting, on Nov. 14, 2004.

Asked what he believes it was, 13 years later, he was unequivocal.

“Something not from the Earth,” he said.

Fravor was the commanding officer of the VFA-41 Black Aces, a U.S. Navy strike fighter squadron of F/A-18 Hornet fighter planes doing an exercise some 60 to 100 miles off the coast between San Diego and Ensenada, Mexico, in advance of a deployment to the Persian Gulf for the Iraq War, he said.

An order came in for him to suspend the exercise and do some “real-world tasking,” about 60 miles west of their location, Fravor said. He said he was told by the command that there were some unidentified flying objects descending from 80,000 feet to 20,000 feet and disappearing; he said officials told him they had been tracking a couple dozen of these objects for a few weeks. 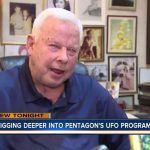 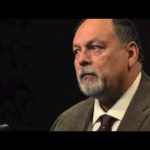