Farmer Edwin Fuhr, 36, was harvesting his grape crop at about 11:00 a.m., when he noticed a metallic-appearing dome-shaped object about 50 feet away in a grassy area. Stopping to investigate, he left his swather and walked to within 15 feet of the object. Noting that the object was spinning and swirling the grass beneath it, he became frightened and backed away. Climbing back on the swather, he looked around and saw four more domes arranged in a rough semi-circle, all identical and all spinning, hovering about a foot above the ground.

Suddenly one object took off, quickly followed by the other four, ascending in a step formation. At about 200 feet they stopped, each emitting a puff of gray vapor from exhaust-like extensions at the base. The vapor extended about six feet, followed by a downward gust of wind which flattened the rape in the immediate area. The objects then formed a straight line, hovered for a minute or two, then abruptly ascended into the low cloud cover and disappeared.

Later Fuhr learned that cattle in a nearby field had bellowed and broken through a fence about the time of the sighting. Going to inspect the landing area, he found five rings of depressed grass swirled in a clockwise fashion. There was no evidence of heat or burning. Some additional circles were found in the area later that month.

“Something was there and I doubt it was a hoax. There’s no indication anything had been wheeled in or out and Mr. Fuhr seemed genuinely scared.” 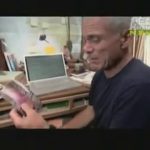 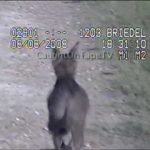