Home  /  Documentaries  /  Conspiracy Theories  /  ARE WE WITNESSING THE RETURN OF THE THIRD ANTICHRIST in 2016?

ARE WE WITNESSING THE RETURN OF THE THIRD ANTICHRIST in 2016?

ARE WE WITNESSING THE RETURN OF THE THIRD ANTICHRIST in 2016?.
With all the recent blood shed and violence in the streets from Pole to Pole on this Planet. Are we witnessing the return of the Third Antichrist in 2016 as predicted by so many? Will the Third Antichrist Rise to Power in Russia as Russian President Vladimir Putin? Will the Antichrist rise in America in an American President? Or will he come from the east. However we find out, the time may already be here. It may be time to pay attention. To close your eyes and wish it away is not going to work if it is true. The time to live for each other is now, not tomorrow. As one we are strong, divided we fall…

Let us now consider prophecies of Nostradamus, the French prophet Michel de Nostredame of the 1500s, that will shed light on our attempts at identifying the Antichrist. Nostradamus lived from 1503 to 1566 in France, and he wrote a book of prophecies consisting of ten sets (or Centuries) of 100 quatrains. The prophetic quatrains have been studied and published continuously in the years since his death. They have often been accurate predictions of future world events.

Let us begin with a few facts to compare.
On August 18, 1999, there was an unusual alignment of planets in a Grand Cross shape, possibly the most unusual Astrological alignment seen in the last two thousand years. And one week before, on August 11, 1999, there was a solar eclipse seen over Europe. And 1999 has 666 upside-down, 666 being the number of the Antichrist in Revelation 13. The Grand Cross, which is one of the most amazing astrological alignments ever seen in history, consisted of: the Sun, Venus, and Mercury in the sign of Leo, Mars and the Moon in Scorpio with Pluto close by in Sagittarius, Saturn and Jupiter in Taurus, and Neptune and Uranus in Aquarius. If Scorpio is considered to be the Eagle, and Aquarius the man, then we have the four beasts seen in Revelation 4 that sit at the throne in heaven, that have the faces of an eagle, a man, a lion, and a calf, in Revelation 4:1-8 (King James Version):
“a throne was set in heaven…
and there was a rainbow round about the throne, in sight like unto an emerald. …and round about the throne, were four beasts full of eyes before and behind. And the first beast was like a lion, and the second beast like a calf, and the third beast had a face as a man, and the fourth beast was like a flying eagle.”

(Nostradamus)
“In the year 1999, in the seventh month,
from the sky there comes a great king of terror,
to bring back the great king of the Mongols,
Mars rules triumphantly, before and after”

Concerning this prophecy by Nostradamus, it is interesting that the solar eclipse passed over France on August 11,1999, and on August 17, 1999 the Cassini spacecraft with its nuclear fuel passed within a thousand miles of earth’s surface, within a day of the Grand Cross pattern.

We raise this subject now because we feel sometimes a message can be over looked when the message is presented to early. Sometimes taking a look back at what we think we knew, suddenly puts things around us in a whole new light.
LIKE SHARE and COMMENT
We always want to know what YOU think!

THANKS for WATCHING The WTF Files™ 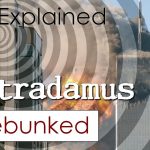